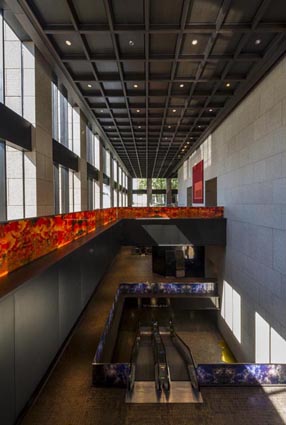 Thater’s work explores the relationship between humans and the natural world, and the distinctions between untouched and manipulated nature. Despite nods to structural film, her underlying references have closer ties to panoramic landscape painting. Her installation, Oz, inverts the horizon and reconstructs the relationship between earth and sky. California Poppies bloom facing downwards on the top railing and stars float up from the lower railing until they meet in the middle, contorting the perception of spatial orientation through gravity and color.

Diana Thater (b. 1962, San Francisco, CA) is an American artist, curator, writer, and educator who lives and works in Los Angeles, California. She has been a pioneering creator of film, video and installation since the early 1990s. Selected solo exhibitions include the Santa Monica Museum of Art; Kunsthaus Graz, Austria; Kunsthalle Bremen, Germany; Dia Center for the Arts, New York; Museum of Modern Art, New York; Walker Art Center, Minneapolis; Vienna Secession, Austria; MAK Center for Art and Architecture, Los Angeles; Witte de With, The Netherlands, and the Renaissance Society at the University  of Chicago. Since 1990, her work has been featured in group exhibitions including three Whitney Biennials, the Sculpture Project in Munster, and the Carnegie International. She is the recipient of awards and honors, including an NEA Grant, a Guggenheim Fellowship, and the James D. Phelan Art Award in Film and Video. Her work is held in many public collections including the Guggenheim, the Tate, the Whitney Museum of American Art, The Art Institute of Chicago,
the Museum of Contemporary Art, and the Walker Center.