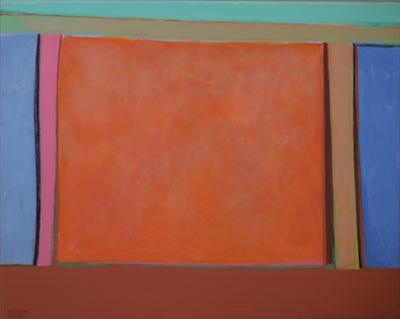 “Our own body processes are accessible to the direct experience of painting and this is the ‘message’… Painting is a balance of paint energy.”- Elizabeth McCord, 1981

See Line Gallery is pleased to present Elizabeth McCord Paintings, an exhibition of rarely seen and newly discovered paintings from the 1950s, 1960s, and 1970s by groundbreaking California modernist artist Elizabeth McCord (1914 -2008). It is the most in-depth examination of McCord’s work in nearly 20 years.

Elizabeth McCord was born in 1914 in Dayton, Ohio. From 1932 to 1934, she studied at the Art Institute of Chicago; after graduation, she taught at the Hull House, Chicago’s first social settlement. While participating in the Work Progress Administration (WPA) between 1939 and 1943, McCord created her first mature works, several of which were exhibited in 1940 at the National Museum of Art in Washington, D.C.

In 1945 McCord moved from Chicago to Los Angeles. Her paintings—colorful biomorphic and architectural abstractions that helped to shape California’s hard-edge movement of 1950s, were greeted with widespread acclaim, frequently appearing in shows at the Los Angeles County Museum of Art, the San Francisco Art Museum, the Long Beach Museum of Art, the Los Angeles Art Association, and the Art Center School of Design alongside works by Lorser Feitelson,
Helen Lundeberg, Josef Albers, June Wayne, and Knud Merrild, among others.

McCord’s paintings were uniquely poised at the intersection of Southern California’s thriving mid-century art, design, and architecture scenes. In 1951, McCord’s work was featured in LACMA’s cutting-edge exhibition, Painting in the USA; the same year, she participated in Six Portable Murals, a group show organized by the Los Angeles Art Association that advertised itself as a collection of paintings “designed especially for mid-century architecture.” “Painting,” a large McCord abstraction acquired by June Wayne and prominently displayed in Wayne’s Alvin Lustig-designed home, appeared on the cover of the Nov. 11, 1951 issue of The Los Angeles Times Home magazine in a color photograph by
Julius Shulman. Leading architectural critic Esther McCoy wrote the accompanying article

In 2011, the seeds of a McCord revival were planted when her Big Pink (1951; on loan from the Long Beach Museum of Art’s permanent collection) was the only painting chosen to appear in Living in a Modern Way, LACMA’s sweeping, celebrated survey of mid-century California design (which is currently traveling internationally). Big Pink was the only painting in the show.

Now, with a wide selection of rare and unseen paintings handpicked from family archives by curator Janet Levy, Elizabeth McCord Paintings both deepens and expands upon the ongoing—and long overdue—rediscovery and reevaluation of this seminal modernist’s work. The biomorphic, hard-edge forms of the 1950s give way, in the 1960s and 1970s, to paintings that blend looser brushstrokes with tighter geometrical masses yet continue McCord’s intensely personal, near-architectural exploration of “light and form”—a style she described in 1981 as “a pulsating surface superimposed over a cubist architecture with transparencies, arabesques and rectangular parches.”

“[I] mov[e] around over the canvas with color until something speaks to me, some discovery is made,” said McCord. “Then begins a long process of adjusting and destroying, adding and subtracting until the surface falls into place with a balance of movement and peace.”