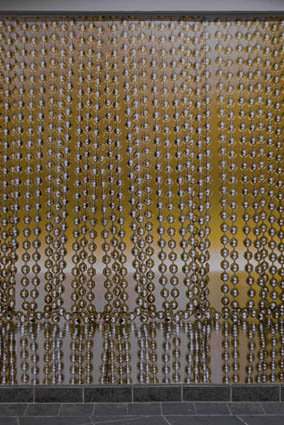 The Golden Veil (Et in Arcadia…) is a large-scale photographic work in which we see hundreds of golden spheres strung together in a chain and hung like a curtain, lit up and glittering. There is mystery in the image, for as enchanting and beautiful as the veil is in itself, it also obscures the space behind it – provoking one to desire for the unknown behind the veil, implying a kind of salacious morality tied up in the veil’s presence as it establishes the boundary between what is known and not known. Perhaps the most surprising element of the photograph lies outside of the borders of the image, within the diagetic space that the veil articulates, which speaks self-reflexively of the image’s audience, and the imaginative possibilities that lie within its interpretation. The shimmering veil teases, for as much as it beckons curiosity about the space it hides, it revels as an object of desire in its own right, iconically raising questions of the act of viewing itself and imagistic power.

Lesley Moon is an artist and writer, born in Santa Monica, CA. She studied Sculpture and New Genres at the University of California, Los Angeles. Moon’s work has been shown in numerous solo and group exhibitions nationally. Her particular interests are in the poetics of photography, geometry and the energetic, semiotic morass of Los Angeles and high fashion. Before studying Art and Comparative Literature at UCLA, she worked as a commercial photographer taking pictures of Hollywood ephemera and rarities for an associate of Sotheby’s. She recently attended the Mountain School of Arts; an experimental post-graduate program located in LA’s Chinatown and is a part of New Atlantis Enterprises, a collaborative organization based in West Hollywood with Piero Golia, Sarah Lehrer-Graiwer and Justin Van Der Fehr. Her work was recently shown at the Musee Los Angeles exhibition.