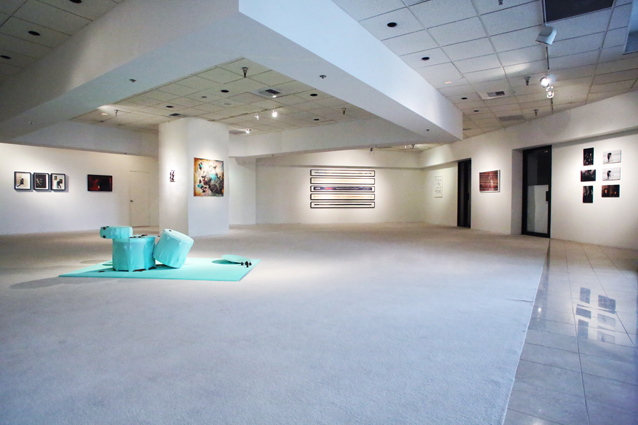 Objective creation in the silent hope that the resulting product will eventually be looked upon as art, 2012
Ink on canvas
8 x 10 inches

Blended, curated by Janet Levy, brings together artists that intermix diverse disciplines inspired by music, exploring the relationship of music and visual art. Their musical influences are expressed in various mediums including drawing, photography, collage, works on paper, painting, sculpture and installation.

Nathan Bell’s drawings are strongly influenced by pop culture and music, he recently collaborated on a t-shirt with the band Divine Fits. Brian Butler is an artist, filmmaker and musician, he is the lead guitarist for Technicolor Skull a collaboration with Kenneth Anger and recently directed Black Lips “Modern Art” and Divine Fits “Would That Not Be Nice” videos. Corey Fogel presents performance and sculpture using sound, objects, textile and food; he is a drummer currently working with Julia Holter. Tito Fuentes is a founding member; guitarist and vocalist of the Mexico City band Molotov. His collages and photography pieces are reminiscent of earlier surrealist works. Dave Muller is an artist and DJ whose works on paper present a dialogue about his musical interests through depictions of albums from his collection of thousands.
Brian Roettinger’s gateway into design was through his early fascination with album artwork. He owns the record label Hand Held Heart and amongst others, collaborates with the band No Age.  Eddie Ruscha is a visual artist and a musician/DJ known as Secret Circuit. He has released many albums under many different aliases and has been involved in many art shows around the world. His visual work is deeply affected by music and vice versa.
Yasmin Than is influenced by the darker side of indie rock, apparent in her collages and photography of the band IO Echo.