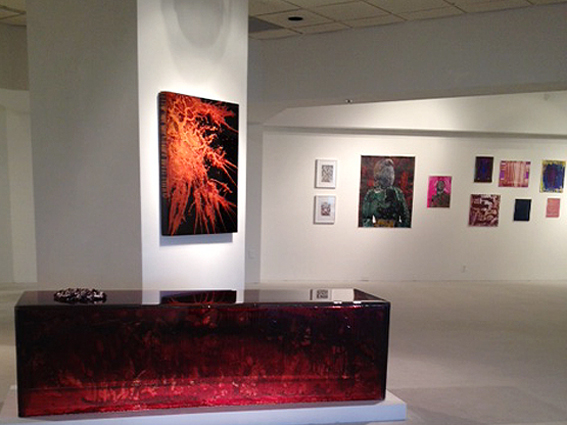 See Line Gallery presents Wild Thing a group exhibition curated by Janet Levy introducing artists that expose the provocative allure of being wild. The diverse works showcase elements of pushing boundaries, the free spirit and venturing into the unknown. The exhibition includes sculpture, painting and works on paper by:

Jonathan Apgar works without any predetermined end. When there is something that happens within a painting that makes him feel uncomfortable, if it feels risky to present to someone or he is exhilarated by a feeling of getting away with something, he knows he is venturing in the right direction. Jordan Eagles has been using preserved animal blood, procured from slaughterhouses, in his signature, multidimensional works for over a decade. Through his experimental, self-invented process, the artist applies blood to layers of clear plexi-glass and then permanently preserves the organic material with layers of resin, allowing the high-gloss surfaces to suspend the fluid forms. Portland based Anna Fidler presents works from her series Vampires and Wolf Men which seeks to create a myth surrounding characters of the past. Her images are sourced in part from photographs found at the Oregon Historical Society, and include portraits from families both prominent and unknown. Fidler’s decisions to use specific individuals were based purely on facial expressions and features that could be interpreted as mysterious, haunting or strange. Amber Ibarreche is using appropriated imagery moving objects from one place to the next in an unrestrained manner. Ashley Macomer’s new series of paintings uses images of women from hard-core pornography as its source material. Using collage and shifts in scale, these highly sexualized representations of women interact with images taken from nature that become the subject for the paintings. She sees the paintings as experimentation within the power dynamic inherent in these images and the possibility of reabsorbing that power into a new concept of the feminine. Angeline Rivas’ new works are celestial road signs and artifacts from a timeless place. They address a new reality where advanced technology is being used for degenerate human needs. Adam Tullie has created a new series of drawings built from the repetitious study of a single, subtly evolving motif resembling the human eye. Exploring the notion of the viewer viewing the artwork, with the artwork viewing the viewer, Tullie work engages the audience with an optical see/saw effect. Los Angeles based artist Eric Yahnker conflates artifice and authenticity to construct a poetic and perverse exposition of the American condition. Outwardly refuting moral and political decency in favor of comic rationality, Yahnker employs absurdity to assault absolutism.