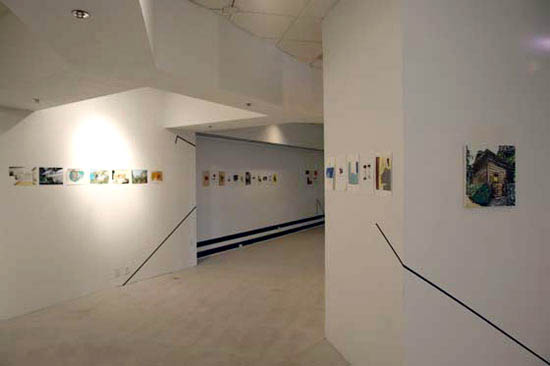 See Line Gallery presents a solo exhibition E-1027 + Le Cabanon by Irish artist Eamon O’Kane. The title for this exhibition is taken from the name of a famous house designed by Eileen Gray. Irish by birth, Eileen Gray spent the better part of her life in France, dying in 1976 at the age of 98 largely unrecognized for the contribution she made to modern architecture. But in recent years new enthusiasm and interest has grown around Gray’s work, which included only two realized architectural projects but many studies, as well as furniture and rug designs.

In 1924 Eileen Gray and Jean Badovici began work on their vacation house, E-1027 in Roquebrune-Cap-Martin, Alpes-Maritimes, in southern France (near Monaco). L-shaped and flat-roofed with floor-to-ceiling windows and a spiral stairway to the guest room, E-1027 was both open and compact. This is considered to be Gray’s first major work, making indistinct the border between architecture and decoration, and highly personalized to be in accord with the lifestyle of its intended occupants. The name of the house, E-1027, is a code of Eileen Gray and Jean Badovici, ‘E’ standing for Eileen, ’10′ Jean, ’2′ Badovici, ’7′ Gray. The encoded name was Eileen Gray’s way of showing their relationship as lovers at the time it was built.

A friend of Badovici’s, Le Corbusier visited E-1027 on numerous occasions and admired it very much, so much so that he was moved to add his own touch to the clean white villa, painting a series of murals on its walls between 1937-39. This intrusion onto her design infuriated Gray, who considered the murals outright vandalism. Whether he painted these murals out of admiration for her work or jealousy of her accomplishment, Le Corbusier became intricately tied with the future of the house. Failing to purchase it himself, he eventually bought a piece of property just east of E-1027, where he built a small, rustic cabin, Le Cabanon. Here he would go for work and quiet contemplation, taking daily swims on the beach outside the house. After he died in those very waters, the whole area was declared a “Site Moderne,” or “Modern Site,” and deemed an area of cultural and historical importance and international interest. Today E-1027 is recognized as the founding element of this site.

O’Kane’s exhibition will examine Gray’s legacy to Architecture and Design and the connection to Le Corbusier through constructing a large installation comprising of wall paintings, screens, works on paper, models and sculptures. The Pacific Design Center is an ideal location for this exhibition in that it provides a context for a reevaluation of Grays influence on subsequent generations of architects and designers. The exhibition will have the feeling of an architect/designers studio where fact and fiction collide illustrating how history is contingent and how it can be distorted. O’Kane’s installation will involve wood and paper screens based on Gray’s and Le Corbusier’s designs as well as a large a wall drawings of Le Cabanon and E-1027.Eamon O’Kane has exhibited widely and is the recipient of many awards and scholarships.