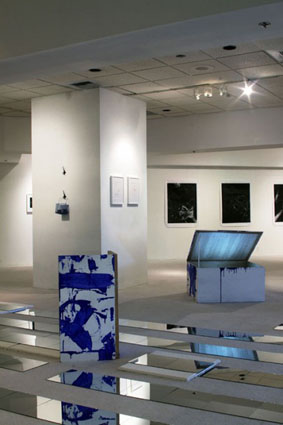 See Line Gallery presents Framed for Life, a solo exhibition by Lesley Moon. Within the exhibition, the artist creates a large-scale installation as incomplete playing field, possessing an idiosyncratic and erotic combination of material game pieces and linguistic signs. Incorporating a fractured checkerboard of mirrored tile containing a variety of found objects and diorama-like scenes, Moon outlines a territory that at once elicits sensibilities of glamourous refusal and melancholic irony. On display will also be a series of unique photograms which record repetitive, patterned gestures made by the artist’s body, continuing the artist’s interest in the various relationships between self-representation, desire and the photographic medium.

Framed for Life (Limerence)
Lesley Moon will present a second iteration of her installation, Framed for Life: Limerence. Simultaneously a continuation and re-visioning of her exhibition, the artist will open up a psycho-spatial circuit of call and response by acting upon the existing game board that meanders through the gallery. As Moon adds onto and augments the original installation, notions of entropic lust, regeneration, originality, object attachment and reformation mix together, sublating the impossibility of fixed romance and desire into a warped theatrical stage.

Lesley Moon is an artist and writer, born in Santa Monica, CA. Before studying Art and Comparative Literature at UCLA, she worked as a commercial photographer taking pictures and cataloguing old Hollywood ephemera and rarities for an associate of Sotheby’s. In 2006, she co-founded Deixis, an occasional journal for intersections of art and text. She worked with artist Mateo Tannatt to produce 2008’s Boofthle Booth-Booth: Deux Doox – The Hollywood Biennial at the Pauline Gallery, and she was a part of New Atlantis Enterprises, a collective founded by artist Piero Golia.  In 2010, her public project, a large-scale photographic mural entitled The Golden Veil (Et in Arcadia…), was installed at the 7th and Fig Ernst & Young Marketplace in Downtown Los Angeles as a part of Mind Frames, curated by Janet Levy. Moon’s first solo project, Tortoise-On-Domino, opened at workspace in March 2011 and most recently she curated On Forgery with Andrew Berardini, the first group exhibition to be held at LAXART. She has exhibited at the Frederick Gallery, Five Thirty Three, Workspace, LAXART, Cirrus Gallery and See Line Gallery.